The Botia Strata Markings Says It All

The Botia striata also known as the Zebra or Candystripe loach’s appeal is not just because of its color, but its amazing markings as well. This kind of fish is best kept in a community aquarium with a group of its kind since it tends to be a little aggressive sometimes. 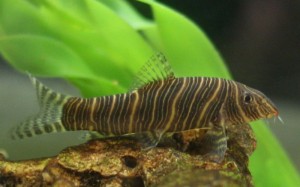 Note that although there aren’t really specific tank conditions for the Botia striata, it should be noted that if you want them to live longer, you can always implement some conditions wherein they can easily adapt and hopefully, breed.  They are active, but peaceful nocturnal species. However, after acclimation, they become diurnal. One more thing is that, they can do little clicking sounds – just when we thought that fishes cannot talk.

Botia striata should always be kept in a fine, sandy substrate so you will be able to protect their hyper sensitive barbell area which continuously hunts for food. It would also make them happier if you can fix a lot of hiding places in the aquarium such as bushes and caves. They need slightly acidic water parameters, preferably in 23-27°C (73ºF to 81ºF) range with a pH level of 7.0 or below.

When it comes to feeding, Botia striata find small snails very appetizing, although they will readily accept most brands of dry sinking pellets. They should be offered a wide variety of frozen foods though, so as to keep them nourished like mosquito larvae, brine shrimp, daphnia and the likes. They also entice in vegetable slices such as cucumber.

Breeding information for the Botia Striata