How to Feed and Keep Hard Corals

With improving technology and a better understanding of what is required hard corals are getting easier to keep in a home aquarium. Hard corals are a lot more colourful then soft corals. They get there name due to the fact that they have a hard skeleton. This skeleton will remain in place even after death. 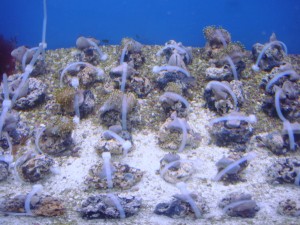 The SPS hard corals are proper reef builders. These types of hard corals are usually covered in a thin layer of “skin”. This “skin” is made up of living tissue. The SPS hard coral skeleton will feel heavy and are very dense. The hard corals have calcium carbonate skeletons, which grow to increase surface area. This allows them to have a greater area exposed to light for energy. The water flow will bring them food and wash away any waste off these hard corals.

The broken parts of the hard corals will fuse together with the help of calcium deposits. This then makes a new structure for different hard corals to grow on top of. This natural cycle is one that will help to build a reef.

The LPS commonly live a lot deeper then the SPS hard coral, where it is not as well lit. There is also less water movement in the deeper areas as the LPS cannot withstand as much as the SPS hard corals. The LPS hard corals will use their large polyps to trap their own food. These hard corals often eat at the same time as the fish in the aquarium.

When it comes to water condition all hard corals will need the same levels of chemicals. The PH levels should be around 8.2 to 8.4. Calcium levels should be 425 ppm. Magnesium should be somewhere between 1300 to 1500 ppm. Alkaline levels of 8 DKH. The water temperature should range between 82 degrees Fahrenheit and 85 degrees Fahrenheit. Toxin levels in the water should be 0, or very close to 0. Some of these toxins include ammonia, nitrite, nitrate and phosphate.

If the water condition is kept as stated above, there is no reason why soft corals and hard corals can’t all live alongside each other in the same tank. 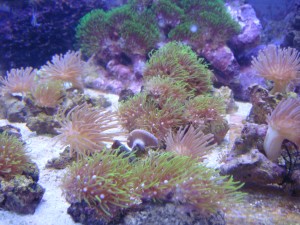 LPS hard corals tend to have larger food and require food more frequently. They will have small fish, squid, krill and others alike. They will need feeding around every two to three days. Some SPS hard corals feed off light using photosynthesis. Others will feed off food the fish waste and phytoplankton.

SPS hard corals can now be cultured, so your hard coral collection doesn’t impact on the ocean.

When deciding which hard corals you want in your tank remember that LPS hard corals are more suitable to bigger tanks as they need more space to live in peace with each other. Therefore if you do not have a large tank please do not attempt to keep LPS hard corals as they will not last very long and you will surely be disappointed.

If you are looking for some easy hard corals to get you started then you should consider bubble coral for a LPS and Montipora Capricornis for a SPS. Then after a few months if they are thriving you can add more hard corals to your aquarium. You need to be patient when putting hard corals in your aquarium. Don’t rush and add them all at the same time, the key to success is taking your time.

Perrys Aquatic Centre in Lincoln have experts on hand who will be willing to help with any questions you might have about hard corals or anything else. They offer FREE water testing services. They also have a wide range of stock and will provide excellent customer service.

« 10 Tips for Setting Up a Reef Tank
Who Else wants to ‘Like’ Perry’s Aquatic Centre on Facebook? »